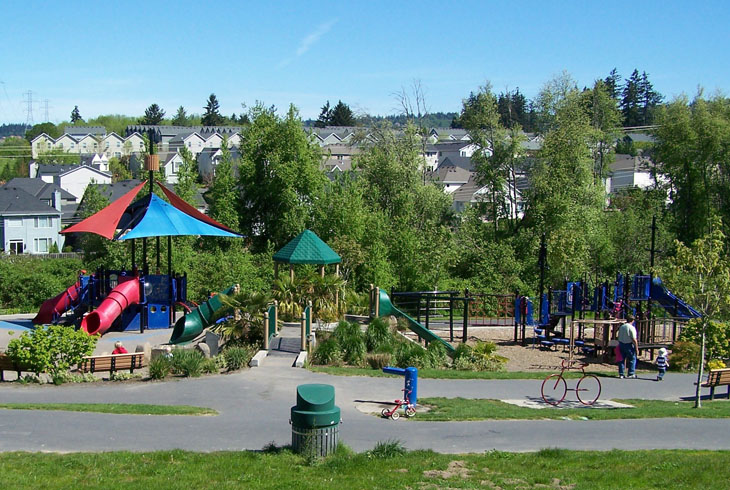 Within THPRD boundaries, the Rock Creek Regional Trail consists of 3.5 miles of ADA-accessible trail in the northernmost part of the park district. (An additional 1.5 mile trail segment extends south from Rock Creek Park into the City of Hillsboro.)

The trail is named for Rock Creek, a tributary of the Tualatin River with headwaters in the Tualatin Mountains (West Hills) to the north. Rock Creek intersects the trail just west of Bethany Lake Park.

The trail runs west to east along Springville Creek and a powerline corridor from Rock Creek Blvd. toward the Washington/Multnomah County line. It passes through forests, wetlands, meadows, and a variety of parks, making it a great destination for walking, running, biking, recreation, and wildlife viewing.

As with most of THPRD’s regional trail systems, the Rock Creek Regional Trail is mostly flat, allowing young bike riders a welcoming place to learn or practice their riding. The trail also connects people to the Portland Community College’s Rock Creek campus and intersects the north-south Waterhouse Trail.

On the far west end of the trail is the Rock Creek Powerline Soccer Fields, followed by Bethany Lake Park, which has ample parking off of NW 185th Avenue. The Oregon Department of Fish and Wildlife stocks the lake with trout, and fishing is welcome with a valid Oregon fishing license.

Further east along the trail is Bethany Meadows Park, one of THPRD’s most popular parks. Commonly known as “Pirate Park,” it's a great play destination for its ship-themed play structure, climbing features, lookout tower, and sandpit.

On the far east end of the Rock Creek Regional Trail is Kaiser Woods Natural Area, which boasts wildflowers in the spring and woodland songbirds year-round.

Other songbirds can be appreciated along Springville Creek, and osprey and a variety of waterfowl can be spotted at Bethany Lake Park. In open areas along the trail, Red-tailed Hawks and kestrels fly overhead.