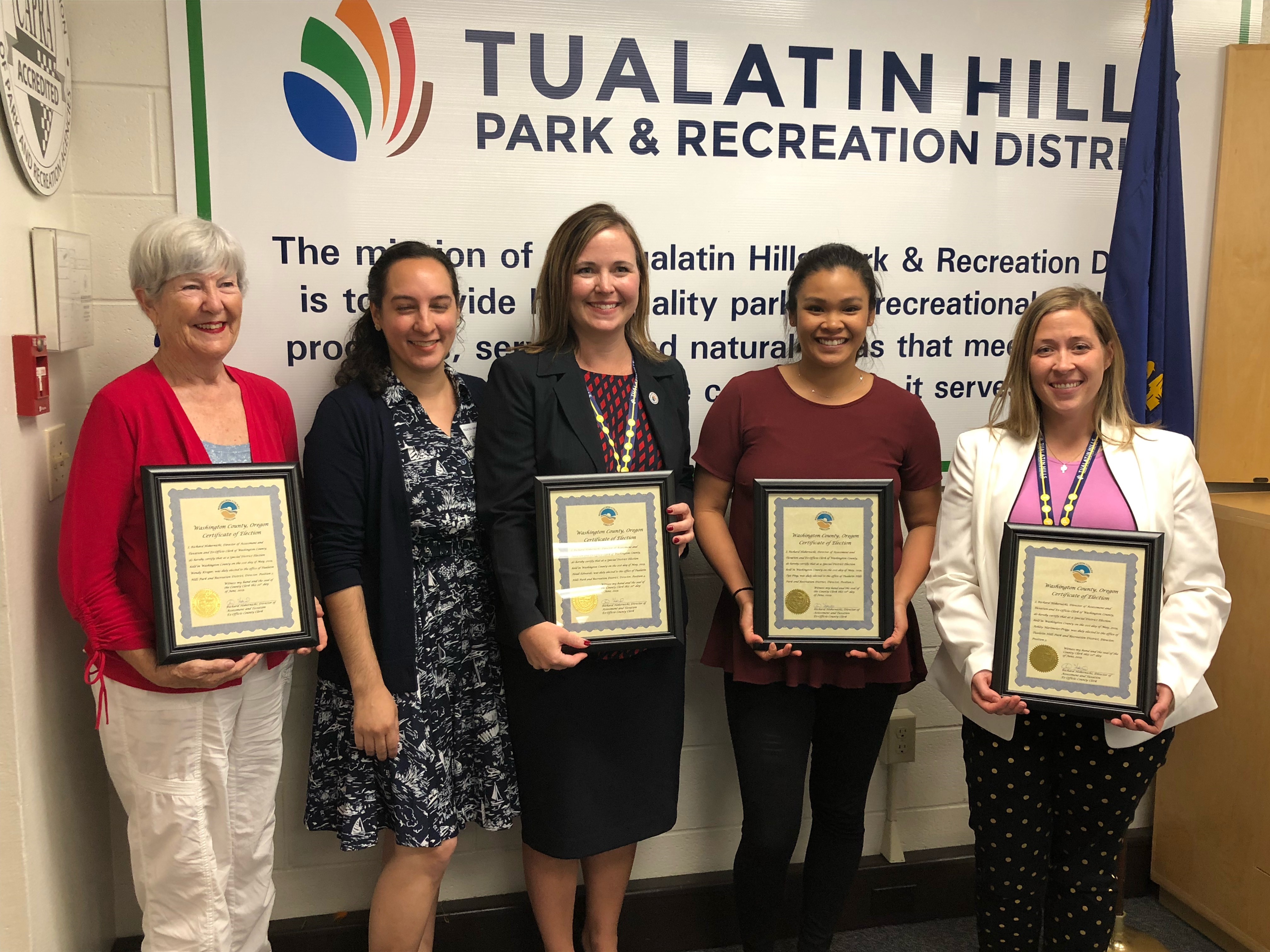 July 23, 2019: The newest members of the Tualatin Hills Park and Recreation District Board of Directors were sworn in at the July 23 board meeting. The occasion marked a milestone in THPRD’s 64-year history, the park district which was founded by a female community activist, Elsie Stuhr, has for the first time a board of directors comprised entirely of female leaders.

To honor the occasion, board members chose area elected female leaders to participate in the ceremony. The board was joined by Lynn Peterson, Metro Council President; Becky Tymchuk, Beaverton School Board Chair; Lacey Beaty, Beaverton City Council President; and Felicita Monteblanco, THPRD President; who all helped swear in the new members.

New board members sworn in:

Wendy Kroger, Position #2
Wendy joined the board in 2018. A long-time THPRD volunteer, she has been appointed in the past on advisory committees for trails and oversight of the 2008 bond measure. She was appointed to the THPRD Board in 2018 and was elected in 2019 to complete the term. She has previously served on the Beaverton and Salem Planning Commissions, the Salem Environmental Commission, the Salem-Keizer Urban Watershed Council, and more. Wendy has a bachelor’s degree in history and a master’s degree in counseling from the University of Oregon.

Ashley Hartmeier-Prigg, Position #3
Ashley was born and raised in Washington County. She and her family are long-time THPRD patrons. She considers THPRD a big part of her active life, enjoying the parks and trails with her husband and rescued terriers. Ashley has served on the THPRD Budget Committee. Ashley holds a bachelor’s degree in political science and law degree from Willamette University College of Law.

Heidi Edwards, Position #4
Heidi has been an active THPRD user for more than 20 years. Her family has participated in numerous activities, programs, camps, and sports. She has worked in higher education for more than two decades at both Portland Community College and Portland State University. She is an active community volunteer and has served on the Beaverton School District Budget Committee as well as a THPRD advisory committee. She has a bachelor’s degree from Purdue University and a master’s degree from Portland State University.

Tya Ping, Position #5
Tya is a health care provider, community volunteer and longtime resident of Washington County who grew up enjoying THPRD parks and programs. As a mom with three young children, she is very familiar with THPRD services. Tya earned her Pharmacy Doctorate from Oregon State University and OHSU. She is a clinical pharmacist at Kaiser Permanente. She has previously volunteered for the Beaverton School District, the Beaverton Library Advisory board, and the Washington County Parks and Recreation Advisory Board.

Board Officers Selected for 2019-2020
One of the first things the new board undertook was to elect their leadership for the new fiscal year. Felicita Monteblanco, who has served on the board since 2017, was elected the board President, Tya Ping was elected as Secretary, and Wendy Kroger was elected Secretary Pro Tempore. Elections for board officers are held annually in July.