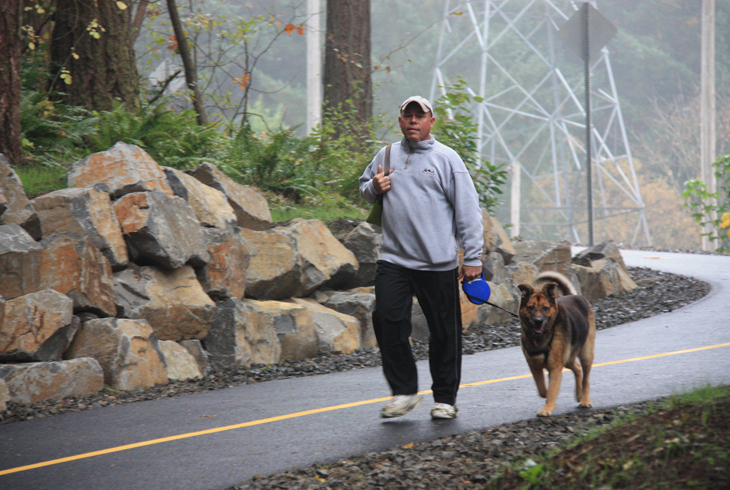 Extending north to south through Tualatin Hills Park & Recreation District, the Westside Trail is one of the region's most important corridors. It connects west side neighborhoods and communities while providing access to the region's distinctive rivers, forests and prairies.

Metro has developed a master plan to expand the Westside Trail, eventually rendering a 25-mile-long trail extending from the Tualatin River (near King City) to the Willamette River (in Portland's Northwest Industrial neighborhood).

Within THPRD boundaries, Westside Trail expansion has been a priority for planners. A bond measure approved by voters in 2008 earmarked more than $4 million for the completion of three new trail segments, including a paved 1.5-mile expansion over Beaverton's Mt. Williams that provides picturesque views of the city below.

The completion of that project in November 2013 has rendered a six-mile segment of mostly continuous trail extending from Tigard city limits at Barrows Rd. all the way to the Tualatin Hills Nature Park and the Merlo Road MAX station in Beaverton. The trail intersects or provides nearby access to several THPRD parks, including Progress Lake, Barrows Park, Murrayhill Park, Westside Linear Park, Hart Meadows Park, Summercrest Park and Burntwood Park.

As funds become available, THPRD will continue to build new trail segments of the Westside Trail, ultimately yielding a 10-mile backbone that will extend north/south through THPRD's service area and over US Highway 26.